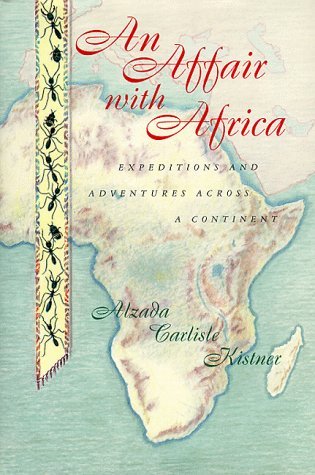 I did it! First book in the seven continents book challenge complete. I read “An Affair with Africa” by Alzada Carlisle Kistner. It’s the memoirs of a woman who longs for adventure and finds it travelling Africa on multiple expeditions during the 1960’s and early 1970’s – alongside her husband, a world expert on the beetles who live in ant and termite colonies. I chose this book because it traversed so much of Africa during a time of political upheaval. I liked that the author was a woman defying gender-norms (to a certain extent) by leaving her baby at home with grandparents to go adventuring – though this is not necessarily a decision I would make for myself…

Travelling across Africa with Alzada, I marveled at the way her American nationality and white skin acted as free passes to so many things. She and her husband survived the beginning of the Congo civil war, just by putting an American flag on the window of their jeep. They frequently explored the outback with a handful of black servants or ‘helpers’ loaned to them by friends or sponsors (like the diamond company in Angola). While occasionally surprised or even shocked by the treatment of black people by their white ‘masters’, this couple (and their two daughters) mostly chose to accept the way things were in order to keep the peace and get on with their very important scientific research. They seemed nearly oblivious, at times, to the nature of the political situation surrounding them, and disinclined to enter into any sort of moralizing. I wondered if this was partially a product of the times they were living in? During the 1960’s there was still segregation & discrimination in parts of the USA, and it seemed that, as scientists, they were somehow separate / above needing to engage with the politics in any personal way.

I’m not sure how I feel about this book, having come to the end. It was an interesting account of a family and a time, and I certainly learned quite a lot about the ants, termites, large mammals and scenery of different parts of Africa. I even got a really interesting glimpse into the White African experience in the last years before most of those colonies collapsed. The author expressed sadness for the fate of such beautiful countries, lost to civil war (and incidentally no longer accessible for specimen collection), but I’m not convinced she felt much empathy for the experiences of those who had to live there. Her ‘affair’ with Africa was with the land, the beautiful animals and the (mostly white) friends she made. That’s not necessarily a bad thing. Still, the next book I read about Africa needs to be by an African. I read and loved “We Need New Names” by NoViolet Bulawayo – so if anyone can recommend another book along those lines, I’ll add it to my list!!

Only six more continents to go. I will have to extend my deadline as it takes me longer to read grown-up books than I thought it would.